Join the forum, it's quick and easy
Fuzzy Pickles
Welcome, We hope you enjoy your visit!

New here? Have a look around!
Fuzzy Pickles
Would you like to react to this message? Create an account in a few clicks or log in to continue.

How about a place to post those beautiful drawings we all know and love?? <3

Here are a couple of mine: 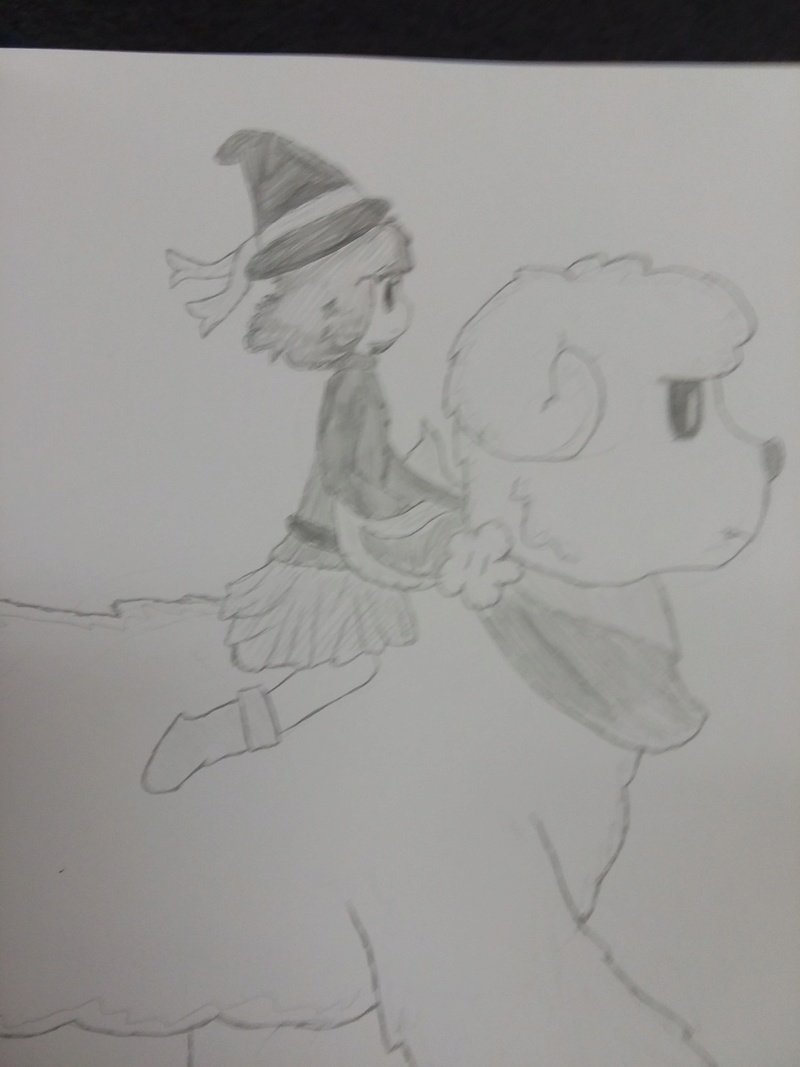 This is Hamme and Calder, two of my OCs you probably have seen before. x'3 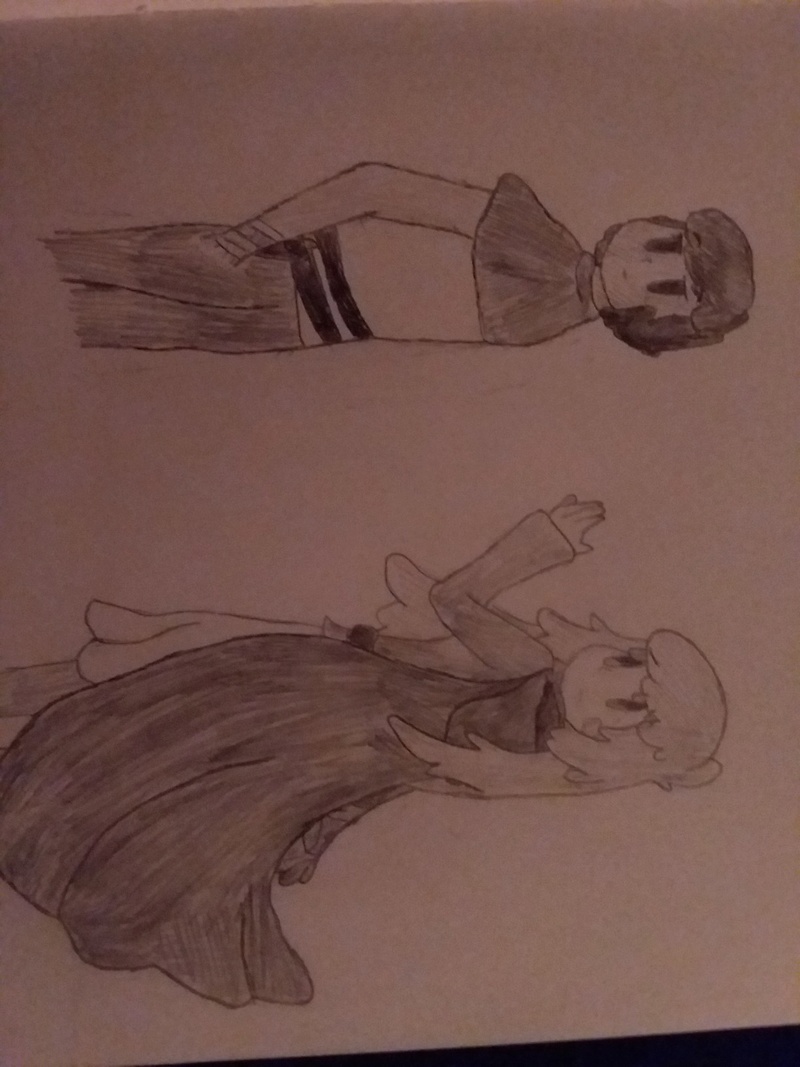 These are two new OCs of mine, ones I have been thinking about for a while.. Elaena and Finn. <3

There's still lots of room for improvement, but I hope you enjoy these! Feel free to post yours below, they're always a pleasure to see. <3

Nice work Emma! I didn't know that Hamme's pet was supposed to be so big. I assumed they were small like an otter. But a big animal guide is good to! There's more ears to scratch and belly to rub.

Your new OC's look very nice to! Nice work on the shading and fold of the clothes. They also have a nice mix of modern/Victorian clothes style going on. I'm not sure what kind of ideas you have for them, but I am definitely looking forward to whatever you may dish out!

I say modern, because the boy looks to be in clothes that are inspired by modern styles, but also implement Victorian/old style clothing. It is definitely great to see your work that isn't based off of or on Miiverse.

Wow! * v * As Joe said it is a really good idea to make Hamme big, it adds to the fantasy element and is a creative idea period! He is so fuwa fuwa <3
Your new OCs are cute too, and their poses and anatomy are well done! I can't wait to see more of these characters, and if there is a story I'd love to see that unfold someday.

Wowza, these are very cute lil doodles! >v< I agree with Jenni her giant familiar is so fuwa fuwa and it seems like such a fun idea, with good versatility! ^v^ and the other ocs seem nice too I really like the cloak Elaena has, it looks cozy. VvV I'm sure it'll be fun writing ideas for all of them, can't wait to hear them unfold, cause I know how fun writing for OCs can be! >v<

I'm so sorry about your broken screen Drew, but you still managed to draw very nicely it looks very cute! >v<

I love that there's a place we can share art, it gets me excited!! VvV 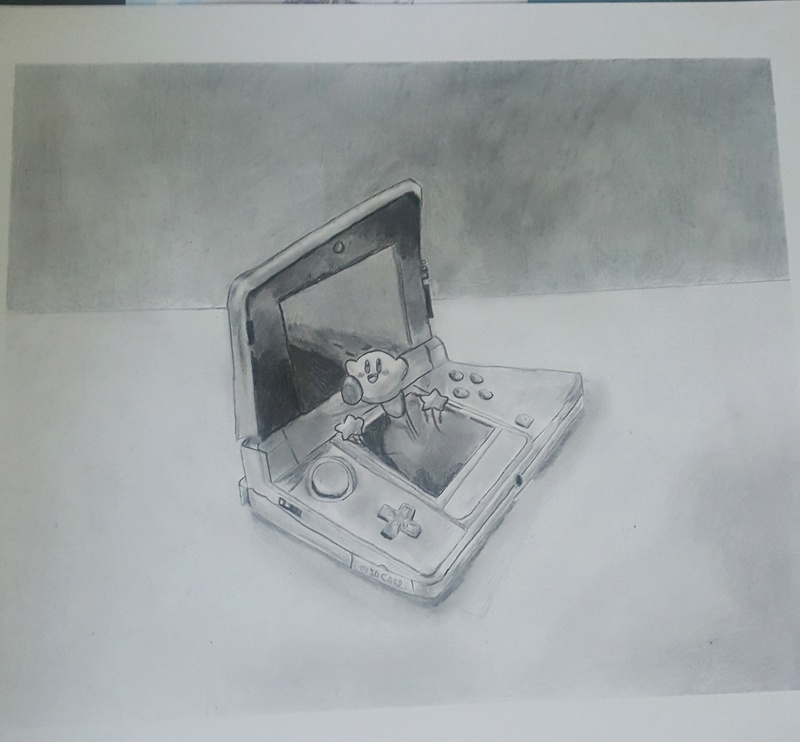 Amazing art minna!
Wow that 3ds sketch it's amazing with that 3d effect. I wanna poke that kirby! XD

I agree, you still did good despite your broken screen. I would've had a lot of trouble even figuring out how my drawing looked with part of the screen missing. Nice work Drew!

Also, way to go Jenni! Did you have a guideline for your assignment? What is the course labeled as/called? This looks like concept art for Nintendo advertisement...before it is finalized/colored. It's also giving me a Nintendo Power cover art vibe.

Awww wowza!! ⭐️V⭐️ The 3D effect of Kirby and the 3DS is amazing, and it pops right out to greet you as you look at it!! The shading is lovely, and even not being coloured it still gives off a bright feeling, excellent job Jenni!! >v< I'm sure you got an amazing grade on this project of yours! （＾∇＾）

Aww gosh thankyou guys!! > w < I tried my best to make Kirby pop like he can leap out of the screen, and worked hard on this overall so it means a bunch ! : v :
Oh this class is fundamental design and I had to pick a personal object and draw it in a way that would get someones attention. I wanted to challenge myself so I went with a 3DS ^ v ^

Fundamental design? That sounds cool! So are you going to go through all the basics for the different mediums like drawing, painting, 3D design, ect?

So how did you do on your presentation day? Or did you just turn this assignment in without classmate interaction. Hope you're all doing well!

I also think the shading is lovely and it really seems to pop! O: It's sort of like how kids imagine storybook characters coming to life, but in this case, they actually did! Well done, my friend. <3

Yup! That is exactly what I am doing, I really want to animate someday too
U v U
Oh and we have critiques in our class, and it went wonderful I got critiqued in only minimal things. I was so nervous before the critique and feeling flustered throughout, haha I can be so awkward : v :
Aww gee thankyou Emma, that is really sweet of you to say! ^ v ^ 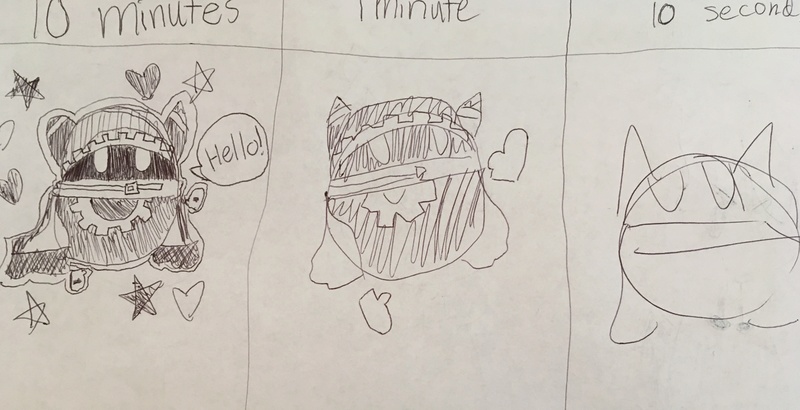 Me and Zeldy did a challenge earlier where we did 10 minutes, 1 minute and ten second drawing challenge. It was really hard at ten seconds, but it was fun!

Ooo good job bro I hope you had so much fun, Magolor the dumb egg is looking swanky! >vO I recommend the challenge to anyone it is fun and hard as well especially if you you might have artblock. X)

Very cool Lucas. I had some exercises like that in my art classes from middle school. Of course at ten seconds, you really can't do much except create a outline. 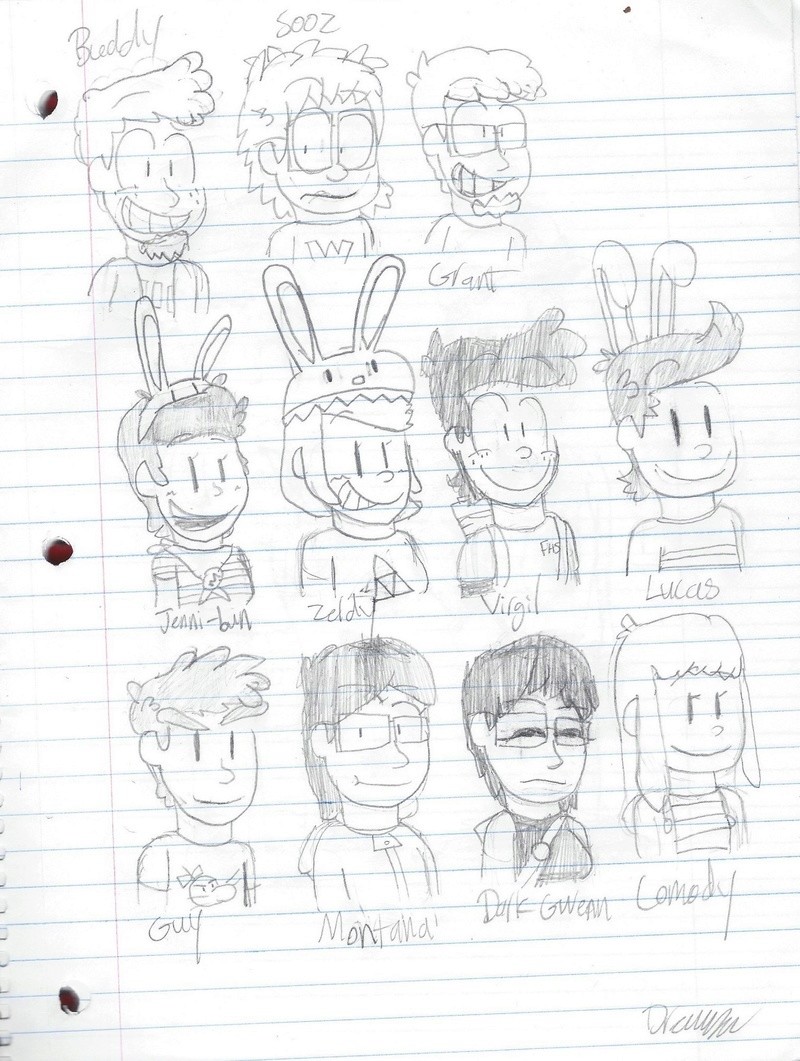 I sketched the upper torsos of half of my Wii U friends.
Based off of their Miis and their own depictions of themselves. (And my own artistic license)
I'm not sure how accurate I was.

Although I've labeled each of them, here's who's who, from left to right:
Buddy, Sooz, Grant, Jenni, Zeldy, Virgil, Lucas, Guy, Montana, Dark Gwenn, and Comody

Wowza oh my goodness! >v< Drew this is real sweet and cool of you, aww bun bun ears galore and even lil things about each little person sticks out like my Zelda shirt, thank you so much my friend I'm sure everyone will love this picture! 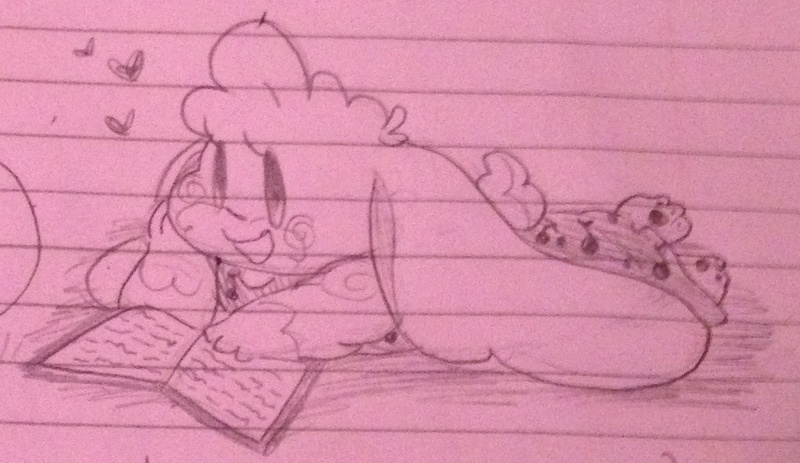 Just a small doodle of Aimee reading a book, I thought I'd post here at least once. >v<

Nice Drew! This is a pretty cool surprise, wasn't expecting to see a drawing post like this. Or to see me added into it, thanks! Like Zeldy said, you put a lot of thought in the different accesories, clothing, and expressions for each of your friends. It shows off their own quirks and personalties. This was really cool of you to do and very well done to boot! I'm not sure if this style was somewhat inspired by Calvin and Hobbes. It's kind of reminding me of that series, but a more realistic style of it. I'd totally read a comic or watch a show about this or in your style. Haven't heard much from Buddy or Montana in a while, but they're in the thick of college currently I believe.


I like how your choice of paper really compliments the drawing Zeldy. The pink color really goes well, even if Aimee isn't supposed to be pink. It just works so well! It's also nice to see drawings of characters just doing every day tasks. It's a nice take on things. Especially, if the series or fan-series is more action-packed or along those lines. Great job!

Thanks guys!
The rabbit ears, are, of course, the Bunny Ears from Super Mario Land 2, the Bunny Hood, and Max's Severed Head (that's what the hat's called, I didn't make that up), on Lucas, Jenni, and Zeldy, respectively.
My drawing style was inspired by the cartoons that I've seen when I was a grade schooler. It seems it's mostly Calvin and Hobbes, though. I think the eyes for people with sclera (read: the white stuff around the black dots) are more of a cross between anime and western cartoons.
In middle school, it was more Garfield based, thanks to the fact I put zero spacing between the eyes. I've since stopped that, with the exception of actual Garfield characters and Sonic.

Aww gosh thank you guys so much! ;v; truth is the paper isn't pink it's the light of a pink lamp I use at night in my room, but still I get what you mean! >v< I love drawing our OCs in all kinds of situations, cause there are so many possibilities, and it'll be a nice mix of slice of life and action I believe. VvV again thank you both! >v<

Hey, you should had just fibbed and said it was the color of the paper or your plan all along. I wouldn't had known any better. 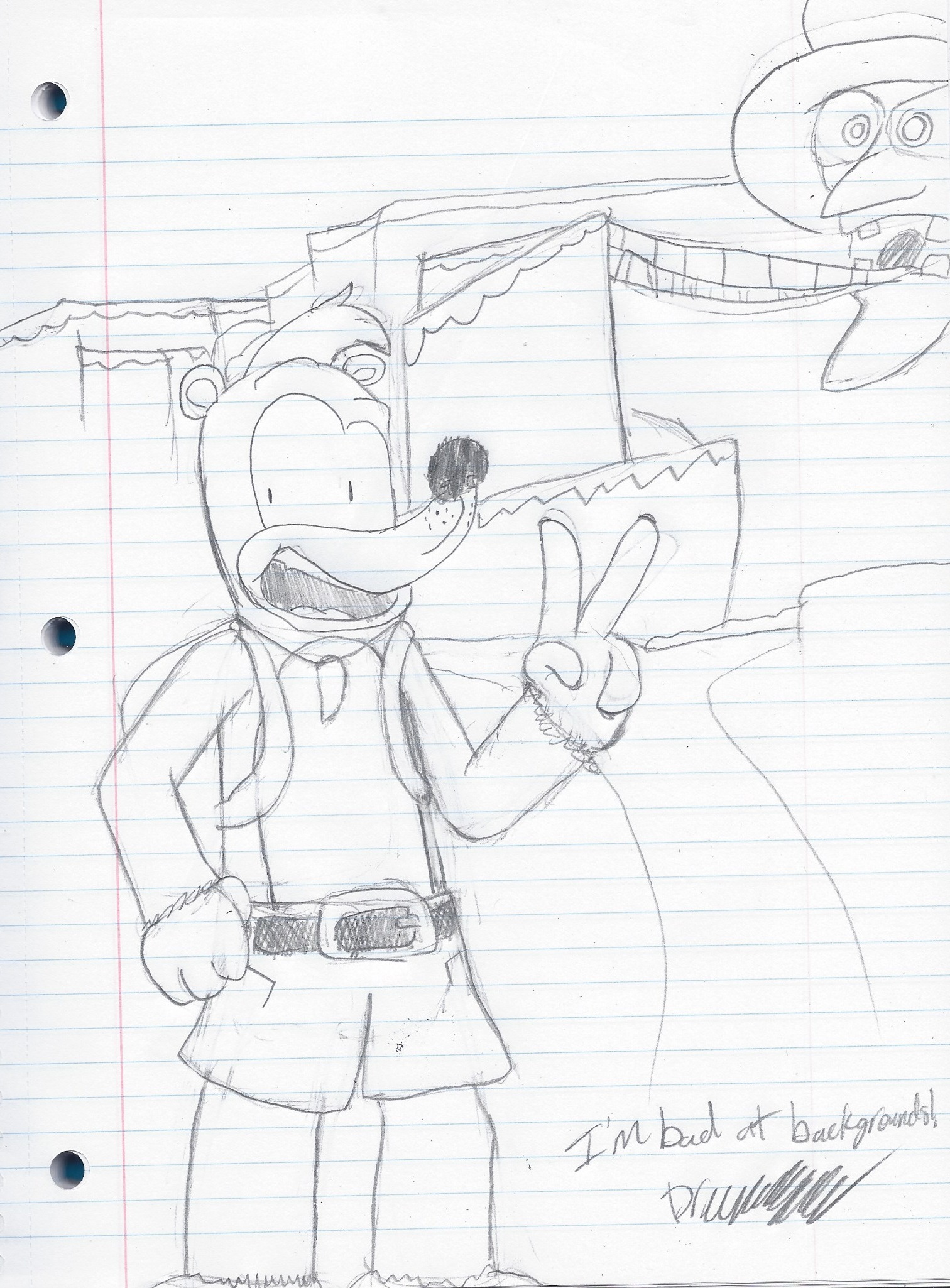 It's a dead server, but I'm posting this regardless.
There might be a chance that people would see this.